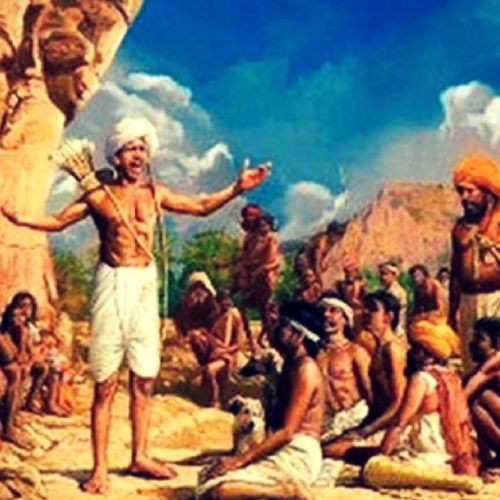 The last popular movement that we shall discuss developed between 1874 and 1901, and was led by Birsa Munda &om about 1895. A tribal movement, it affected an area of about 400 square miles in the Chotanagpur region of South Bihar. Born out of the basic problems affecting the mbals in the colonial period -erosion of customary rights forced labour, colonial laws etc. it had a distinct connection with Christianity in the early phase. As K.S. Singh (Birsa Munda and his Movement 1874-1901, Delhi 1983) notes, the Mundas, in fact, accepted Christianity with the belief that the German missionaries would set things right by checking the malpractices of the zamindars. In fact, around 1857 some zarnindars attacked the German mission at Ranchi, as it sympathised with the Mundas. From around 1858 we get references to Christian tribals resisting oppressive zamindars. This trend became quite pronounced between 1862 and 1888. In 1867 as many as 14,000 ‘Christians’ filed a petition against the Raja of Chotanagpur and the local police, and submitted it to the colonial authorities. Some steps were taken to restore lands of some of the dispossessed Mundas

In March 1879 the Mun&s claimed that Chotanagpur belonged to them. In 1881 some sardars led by one John the Baptist set up a kingdom at Doesa. After this the movement went through some major changes. Dissatisfaction with the German missionaries made the Mundas severe their links with them. Instead, they turned to the Catholic mission. The colonial officials and the zarnindars came closer to each other in order to smoothen the movement. What developed was a struggle which united the ‘rebels’ against all Europeans including Christian missionaries and officials as well as the dikus and the landed elements.