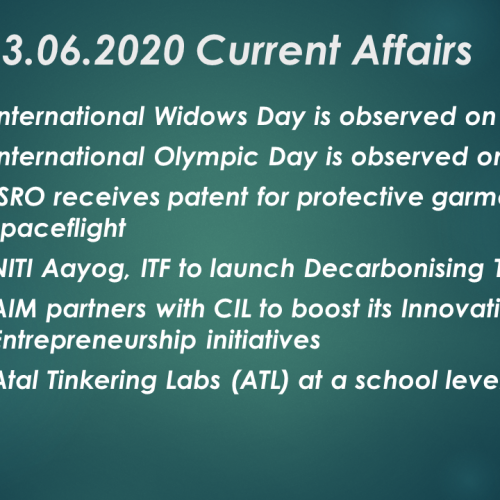 The state government has decided to take up the task of regulating pre-primary schools in the state anew in light of provisions of the draft national education policy.

In the past, the directorate has received complaints from parents of pre-primary school students being run in undesirable conditions, from dingy premises and apartments.
Currently, pre-primary schools in the state have no fixed syllabi, fee structure or infrastructural norms that they need to mandatorily meet. Bardez, Tiswadi and Salcete talukas have the highest number of pre-primary schools as per DoE data.

International Widows’ Day is observed on 23 June. A million of widows across the globe live in poverty, and without any substantial support. Widows, and people dependent on them, face extreme poverty, a lot of injustice, among other societal. The day aims to address the issue that widows and their children face in several countries.

The United Nations passed the resolution A/RES/65/189 and observe International Widows’ Day since 2011. The aim is to draw attention to the voices and experiences of widows and to galvanize the unique support that they need. Th day provides an opportunity to take action towards achieving full rights and recognition for widows.

is observed on 23 June. The day is celebrated by people across the world. On 23 June 2020, the Olympic Movement is to celebrate Olympic Day by creating the world’s largest 24 hours digital-first Olympic. The 2020 edition is the first to be celebrated virtually. The day is celebrated to ensure that people can all still #StayActive in the safest way possible despite restrictions because of the COVID-19 pandemic.

The Indian Space Research Organisation (Isro) has received a patent for its Liquid Cooling and Heating Garment (LCHG).

It is made of biocompatible fabrics and components to provide a comfortable temperature and removal of sweat for astronauts, for use in space for protection from hot and cold environments.

LCHGs are used in space, military applications, fire fighting and also for personal cooling and heating purposes for protection from hot and cold environments of industrial areas or in extreme temperature and humidity conditions that may exist in work environments.

These garments have a system for circulating temperature controlling fluid into and out of the garments, for instance, through tubes inside the garment.

NITI Aayog in collaboration with International Transport Forum (ITF) is to launch the “Decarbonising Transport in India” project on 24 June. The project intends to develop a pathway towards a low-carbon transport system for India. The project will be launched by ITF Secretary-General Young Tae Kim and NITI Aayog CEO Amitabh Kant.

The project will inform the transport and climate stakeholders in India about planned project activities.

The project will provide an opportunity to provide inputs regarding India’s transport challenges and how it can be related to CO2 reduction ambitions. The discussion will help to focus the project further on India’s specific needs and circumstances.

It will provide the government with a detailed understanding of current & future transport activity and the related CO2 emissions as a basis for their decision-making.

Arms Trade Treaty (ATT) promotes, regulates, and monitors the international sales and transfer of conventional arms as per the global standards. ATT regulates from small arms to battle tanks, combat aircraft and warships.

AIM partners with CIL to boost its Innovation and Entrepreneurship initiatives

Coal India Limited (CIL) has agreed to partner with Atal Innovation Mission (AIM), NITI Aayog to support proactively the flagship mission’s innovation and entrepreneurship initiatives across the country. A strategic Statement of Intent (SoI) partnership between AIM and Coal India Limited was signed and exchanged in a virtual e-summit.